I can now state with much gratitude and humility that we have moved from Faking It to making it. I'm not sure one is ever "made" when it comes to parenting. It's a lot like a marriage that way, you never stop working if you want it to work. And I would be remiss if I didn't state that I still have days when I struggle to open my heart the way I wish I could. But that isn't about Yonas. I have that experience with all of my children. But we are making it.

If you were one of the many that left a comment on that Faking It post, whether to say, yes I felt that too or hang in there, it will get better, I thank you from the very depths of my soul. Those comments carried me through some very dark times. I held on knowing that so many had gone before me and come out the other side. If you are in the thick of it now, or still, know you are not alone. Things will get better.

Yonas is doing spectacularly well. His language has exploded. He is deeply in love with each of his sisters. He likes skin and carbs and water. He is quick-tempered and squirrely. Funny and brave. He weighs a mere 3 pounds less than Safa. I look at him sometimes, my heart heavy with love and think of the strange magic that brought him our way. And other times I look at him and think of his first family, all they lost, and all I can think of is the strange hell that brought him our way.

I hold my warm-skinned water drinker in my lap while I type these words. He sucks his thumb and hums, moves his body deeper into my flesh, wiggles his newly-painted sister-pink toenails. He leans back and looks up at me, his eyes now more answer than question.
Posted by Ashley at 11:12 AM 8 comments: 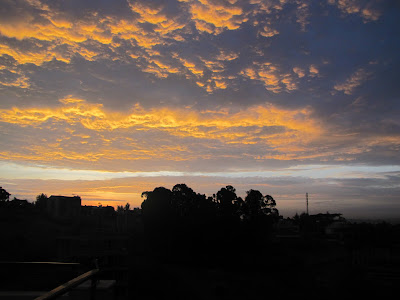 I ran up four flights of stairs to catch this sky. It was gone just moments later.

I feel like I let you guys down when I don't feel inspired enough to write a Mindful Monday post. I feel like I let myself down too. Shortly after we got home from Ethiopia, I signed up for two online classes. I've been around the post-new child block enough times to know how easy it is to lose yourself in new motherhood; the exhaustion, the feeling like you're treading water in the middle of the ocean, no land in sight. So I thought I'd make a proactive move and throw out a lifesaver to catch my drowning identity.

Guess what? It didn't work. I've hardly done a damn thing in either class. And I will say in all honesty and in order to save a bit of face that it is in part because I haven't felt well. But that's a bit too convenient. So I started thinking maybe that's just what is supposed to happen. Maybe you're supposed to lose yourself a little. Maybe you're supposed to look up after three months (or a year, five?) and think, "What the hell happened here?"

Maybe it's in the crawling back on bloody hands, knees and heart that you find this new version of yourself--bigger, badder, bolder than you ever knew you were. Is it the same after this phase of life is over? Will it be the same when all my children are in school and I look up from this too short/too long phase of life and find myself not knowing who I am? Probably.

It's juicy, isn't it, this re-discovery of self? It's also painful. I'm trying to get to the part where it's also exciting and fulfilling, but I'm not there yet. I'm still in the thick of it, trying to get okay with not knowing exactly who I am right now. I seem most to be defined as Mother of Four. Which is beautiful. It's exactly what I want. I also wanted to be able to complete an Extreme Visual Journaling class online and not look exhausted and feel ninety years old in my body. Oh well.

It may be too much for me to work toward right now. But it's worth trying, isn't it? I know women that are masterful at this balance, but it is a struggle for me. But there is always something to be said for fighting the good fight.

So to all you mamas out there that fight the good fight of continually claiming and reclaiming your sense of self, on this second day after Mother's Day, I bow deeply before you, one warrior to another. Good hunting.
Posted by Ashley at 1:24 PM 6 comments: 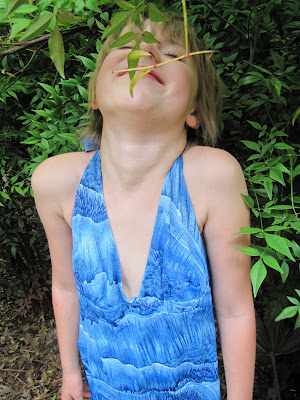 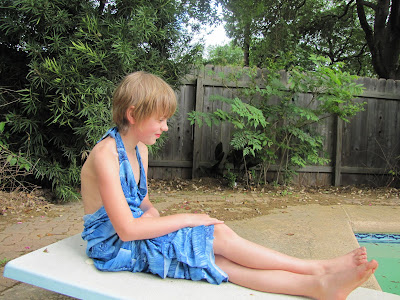 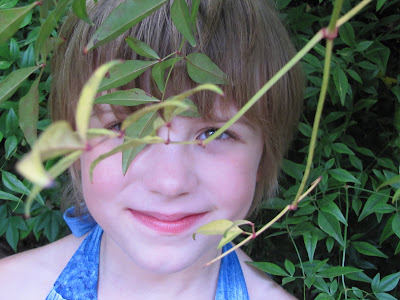 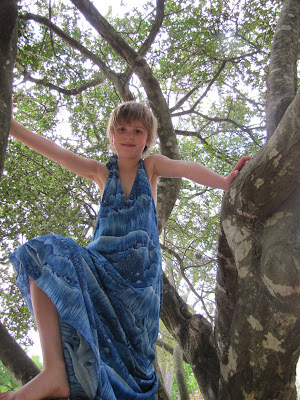 She has been since the day we left for Ethiopia. Something about having a new toddler around has kept me from getting some things done. Like birthday dress pictures. Every year the girls wear an old dress of mine on their birthday and I take pictures of them. I can't believe I've been taking Ava's picture in this dress for eight years. These (and Safa's) were taken about a month ago. Since Eden's birthday is on Sunday, I thought I'd better get on it.
Every last bit of little girl is gone now. It has been for awhile. She moves through her world, her own life, and I see increasingly how parenting is indeed letting go a little each day. I'm thankful for her presence in our family, how she watches out for and loves her siblings, her sense of humor, her thoughtfulness. My degree is in Early Childhood. I was a nanny for years. Once kids hit eight though, I'm in unfamiliar territory, uncharted waters. I may not know what I'm in for, but I know she will be a beautiful, gracious teacher as I fumble my way through as her humble student.
Posted by Ashley at 10:38 AM 2 comments:

I like to live my life with a sense of magic always intact. Always believing in the veil. Always waiting for the beautiful, rare moments when it is lifted for my heart and eyes and the expanse and beauty of life unfolds before me. But it feels gone right now. And so I think of this poem and try to remember...

Think in ways you've never thought before.
If the phone rings, think of it carrying a message
Larger than anything you've ever heard,
Vaster than a hundred lines of Yeats.

Think that someone may bring a bear to your door,
Maybe wounded and deranged; or think that a moose
Has risen out of the lake, and he's carrying on his antlers
A child of your own whom you've never seen.

When someone knocks on the door, think that he's about
To give you something large: tell you that you're forgiven,
Or that it's not necessary to work all the time, or that it's
Been decided that if you lie down no one will die.