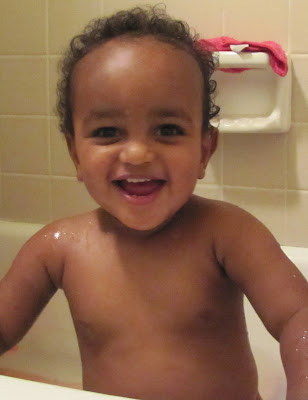 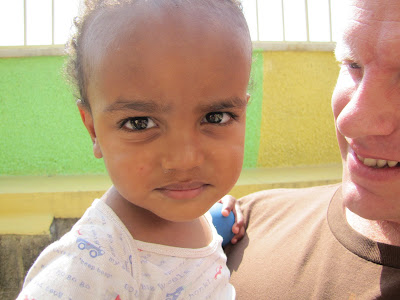 We've been home with Yonas six weeks today. In that time, we've had lice, pneumonia, fierce tantrums, food issues, screaming, crying, fights, lost sleep, homework, laundry, and colds.
We've also had a birthday, dancing, laughter, joy, sunshine, silliness, flowers, singing, long walks, and love.
When I think about how far we've come as individuals and as a family in this short six weeks, I'm astounded. The six of us have worked hard.
Yonas is becoming himself. The person he is outside of institutional life. A boy with a family. He's beginning to lose his orphanage persona. He is sleeping. He has outgrown many of the clothes that fit him when we first got home. The shoes we brought to Ethiopia that were too big for him are now too small. His hair is softer, longer. He looks healthier, more vibrant.
The food issues are abating. He is no longer eating so much he vomits. Many meals come and go with no problems at all. And although he still eats much more than he needs, we are seeing the beginnings of self-regulation. Some milk leftover in his cup. Not asking for thirds. Getting down from the table while the girls are still eating. We have begun introducing the notion of "all gone".
We are communicating through a nice mix of Amharic, English, and some signs. He's learning several new words a day. When he first came home he constantly babbled in a loud, sing-song voice the same syllables repeatedly. This is called "Excessive Chattering" and some post-institutionalized kids do it to block out fear and grief. He doesn't do it at all anymore.
The tantrums are lessening in both intensity and length. When I had pneumonia, Erik wisely implemented a plan where every time Yonas began to tantrum, he picked him up. No matter what. Even if he had to chase him down because he didn't want anything to do with him. It worked. So that's what we do. We pick him up. This has not always been easy for me. This has taken real work on my part and I struggled with it. Sometimes the last thing I want to do is pick him up. But I do it anyway. Most of Yonas' tantrums are born out of being told "no" in some form. There's this idea that adoptees have experienced the "Primal No". Their birth families said, "no", the orphanage said, "no". For many adopted children being told "no" feels like rejection. It feels like, "You are unlovable. You are not good enough. You are unworthy." As we work to earn his trust, he softens. He begins to accept a "no" for what it is.
He is funny, affectionate, loud, daring, short-tempered, and generally at his core, I think, happy. He loves his sisters and they love him. He has begun to understand when Erik leaves for work in the morning it won't be the last time he sees him. In the first weeks we went to the school to pick up Ava and Eden, he was friends with everyone. Indiscriminate with his interactions and play. Now he's more wary. He checks in with me, asks for help, comes back to the safety of my lap when he needs a break.
It has not been easy. I still have moments of dread and fear and sadness. I wake up some mornings, think of the day that lies ahead, how much emotional and physical energy I need to usher us all through the day, and I take a deep breath and think shit, here we go again.
But we are getting there. We are doing it together. And when Yonas says, "Nah, Mama. Nah." (come, Mama), I know I want to follow.
Posted by Ashley at 10:49 AM

Amazing Ashley! Makes me so happy for you all! The picture difference is amazing!

So much progress in such little time - congratulations! And it does keep getting easier and easier.

{{HUGS}} HUG HUG HUG HUG!! I love your little man. Thank you for sharing these pictures. T is going to love seeing them when he wakes up! If you think it would help Jonas to see T let me know your email and i'll send an invite to the 'private' one (my digital footprint got too big so for now his blog is behind doors) my public yahoo address is gon_hikn93

Fantastic. I am so happy to read this. It will get better and better. His eyes look so much softer now.

Thank you for taking us along on your journey. This is wonderful!

So, so, so HAPPY to hear your voice again and to know that Yonas is settling in to his loving family...and that you are all settling in together. Your words are those of a mother with so much love and compassion. You amaze me.

I can relate to everything you are saying. We just brought home a 2.5 year old from Korea 5 months ago. In the mornings when I hear him whining in his bed, my stomach clenches up. My body physically "remembers" how hard it was in the beginning (and still is sometimes). But now, 90% of the time, when I call him, he runs out giggling and comes in for a big hug. Thanks for your honesty.

And we are following you too, loving the chaos and learning from it.