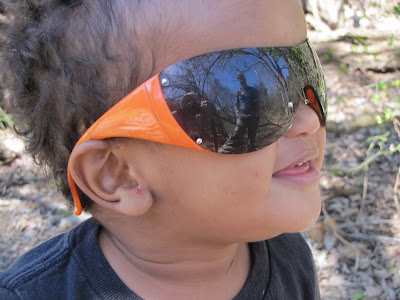 Our trip to Ethiopia is settling in my soul. I knew it would take awhile. As you might imagine, I haven't had just a ton of time to devote to processing our trip, so I've just had to let it quietly roll over me without working very hard at it. And over the past five weeks Ethiopia has found its way into the deepest places of who I am. I'm not finished. In fact, I'm not sure I will ever be finished processing it and I think that's a good thing.

On Monday as I was driving Ava and Eden to school, we were listening to this. K'naan is Somali, not Ethiopian. But the lyrics always make me teary. And on this day they reminded me of the lovely driver, Elias, Erik and I had on a day trip we took to see Yonas' birthplace.

I didn't get teary that morning because I pitied Elias, or even wished for something better for him. I got teary because I missed him. Ethiopia and her people will do that to you.

Soon, I think, I will begin to recount our trip here. I took a journal. I think of myself as a writer, but didn't write down anything about our trip while we were there. Not one thing. I just couldn't do it.

The day we met Yonas, I took off the necklace that I'd been wearing for 10 months in honor of him. It had the Ethiopian flag on one side, his name engraved on the other. I was wearing another necklace, one I meant to leave at home and I took off that one too. And on the day we went to the U.S. Embassy to take legal custody of Yonas, my purse got turned upside down and the other one, the one not bearing Yonas' name, got lost. I really liked that necklace. I was bummed when I couldn't find it.

This morning, as I was driving to a parent-teacher conference I realized something. That necklace, whether it is now around someone else's neck, whether it gets thrown away or lost, it will probably always be in Ethiopia, even after I stop breathing.

On that day, I lost something inconsequential in the scheme of things in Addis Ababa, Ethiopia, while Ethiopia lost one of her sons.
Posted by Ashley at 11:43 AM 2 comments: 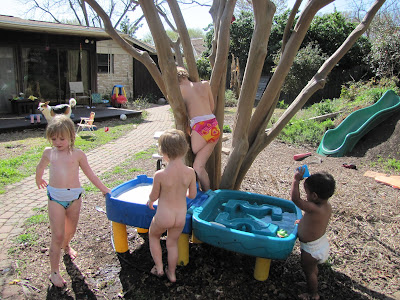 lots of children roaming the backyard in various stages of undress. Heaven. 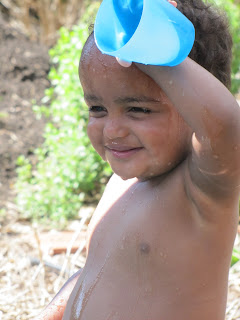 I've been absent from the cyber-world because I got pneumonia. Coughing-so-hard-you-throw-up, in-bed-for-days, just-take-me-out-back-and-shoot-me, pneumonia. I was able to avoid the hospital by visits to the Austin Infusion Center for breathing treatments and IV fluids and antibiotics. I'm now doing much better and taking the oral version at home. This antibiotic is one commonly used for pneumonia and bronchitis. Oh, and exposure to anthrax. I take it and about 45 minutes later feel like I need a simultaneous nap and quick vomit. And it makes me itchy and cranky, and I'm pretty sure it makes me hover on the verge of a heart attack for at least two hours after taking it. But I'm immensely thankful for the kind nurses and comfy chairs of the infusion center that allowed me to sleep in my own bed and hack in privacy.

While in the thick of it, I hardly saw my children. As you might suspect this was hard for the girls since we'd only recently returned from Ethiopia, really hard on Yonas when we were just beginning our journey of attachment, and excruciating for Erik who became a single parent of four overnight. We continued to receive meals and offers of play dates which helped a lot, but Erik was left to care for Yonas on his own. And frankly, this is still a boy one needs to have regular breaks from. (I'd like now to offer up all kinds of respect and awe to the single parents out there---Cindy, Shannon, etc; I bow down before you.)
So while laying in bed I had some time to think. Here's what I thought about: Injustice. How many people throughout history have died of pneumonia. I thought about pioneer women. How many mothers would have had to keep on keepin' on until they couldn't any longer and then eventually died. How I got to rest in bed and watch movies on a laptop. I thought about how many people with AIDS have died of pneumonia and how ashamed the United States should be for its startling lack of monetary contribution to the global HIV/AIDS pandemic. I thought about how many people all over the world right now are dying of pneumonia because they don't have access to medication. I thought about Ethiopia and her people. Of Yonas and his orphangemates. Of their respective birth families and what would happen if they contracted pneumonia. I thought, I'm so thankful.
When I remember we have only been home for three weeks, I am astounded by the progress we have made as individuals and as a family. Yonas has settled in a bit. He is a sweet, funny, affectionate boy that has the same capacity for delightfulness that Eden has. Except when he's not. His tantrums are lessening in frequency and length, but they are still a daily matter. Erik brought him so far in the time I was the sickest. But Yonas and I have work to do together. The work he has done with Erik doesn't transfer automatically to me. So yesterday, when I offered him a bite of soup he found disagreeable, he tantrumed. He went to the pantry and found the Swiffer. He slammed it on the ground in a threatening way for my benefit. When I turned my back to ignore the ugly, he hit me over the head with it. He is that boy.
He is also the boy that puts his chubby hands on both of my cheeks and pulls my mouth to his. The one that lifts my shirt so he can rest his head on my bare belly while he sucks his thumb. The one that belly laughs for his Papa and hugs Ava. The one that loves his car seat and being outside, the one that freely pours water over his head in the bath and has learned the words bubble, toot, mama, donkey and the sign for more since being home. He is that boy too.
The most important thing I thought while I lay in isolated sickness was this: I miss him. I would be lying if I said that I don't have moments of doubt and pessimism and anger. I do. But I missed the weight of his body on mine, his skin, his Yonasness.
And for that, this beginning of falling in like, I am thankful for pneumonia.
Posted by Ashley at 10:50 AM 18 comments:

Last week, when I was ready to head for Belize or Costa Rica, (somewhere warm with beaches, I hadn't worked out the details), I kept analyzing where I was emotionally and asking myself, "What happened? What went wrong?"

But the very simple answer is this: Nothing went wrong. It just went.

I do know some things that made it harder. We were matched with Yonas on March 31st, 2009. We waited almost a year to bring him home. We spent the majority of the past year filled with longing for our son, waiting for the time that we could hold him in our arms. It's not that we were unprepared for all the challenges; we took classes, read books. It's just that I imagined that the joy and relief of having him home would trump the challenges. But they didn't. That's a gross feeling, but an emotionally honest one.

I will also confess to thinking that I would be immune to the grip of Post-Adoption Depression. I'd read about it on the forum. I'd read Melissa Faye Greene's piece on Post-Adoption Panic. I had no judgment, only empathy. I just never in a million years thought it would touch me. I was wrong.

I also knew about the food issues that many post-institutionalized children face. But I naively thought that because Yonas had been in care for so long, that because he hadn't experienced the kind of hunger many children coming home from Ethiopia had, that those issues would be minor. I was wrong. Really, really wrong.

I underestimated how much grieving I had left to do for our family of five. I have grieved every change our family has undergone. Every incarnation has brought a what-are-we-doing-what-have-we-done? feeling. I just thought I'd worked through most of it. I was wrong.

I'm not head over heels in love, I'm not full of patience, I don't have the answers for every challenge Yonas lays down at my feet. And that's incredibly painful.

It's also really okay. I don't have to be more than I am (even though I really wish I could be).
I would love to know that every move I made was bringing us all closer to emotional health and peace. I would love to have a crystal ball that would reflect back to me our shiny, happy, healthy future selves.