I have been wearing this necklace since shortly after we were matched with Yonas. That was seven months ago. I've taken it off once. I decided I would wear it until we brought him home. That I would wear it while I missed him, while I worried, while I prepared for him. That I would wear it in on the plane to Ethiopia and when we met him for the first time. I had no idea I was committing to wearing it for 9 or 10 months. 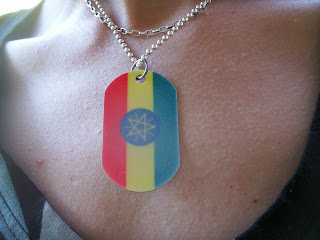 The flag is fading. 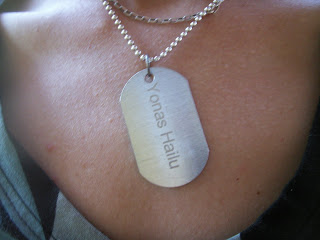 The truth is I'm tired of wearing it. When I change positions in the night, it moves against the chain and wakes me up. I like necklaces. I have many others I'd rather be pulling from my toddler son's chubby hand while carrying him on my hip.

Someday I will give it to him, this talisman of love. Someday when he's old enough to understand what it meant to me to wear his name above my heart and wait.

I have a necklace that says Expecting from Africa. I have also worn it for about 10 months and will wear it about 10 more. I have taken it off twice (because I had to for surgery). I can't wait until I can replace it because I am no longer 'expecting'.