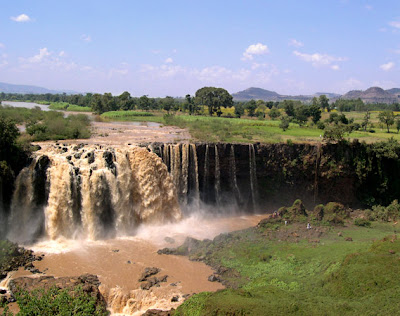 So, one of the things I intend to do with the increased wait time is to blog here a bit more about Ethiopian culture for those who read this blog and are interested. I might also throw in some stuff about transracial adoption for good measure and if you read this blog and have a question throw it my way.

Ethiopia is a country rife with problems. But it is also incredibly beautiful, has an amazing history, and proud, strong people. So while Ethiopia's problems are important to me, more than I can convey, it would be a disservice to Ethiopia and her people to talk about just the negative. So here are some of the positive: (Pictured above, the Blue Nile Falls)
---Ethiopia has a total population estimated at approximately 75 million, is home to more than 80 ethnic groups and languages, with some 200 dialects.
---Ethiopia is one of a few African countries to never have been colonized, although it was occupied by Mussolini's Fascists from 1935-1941
---Ethiopia follows the Julian calender which consists of 12 months of 30 day and a 13 month of 5 days (or 6 in a leap year). The calender is 7 years and 8 months behind the Western (or Gregorian) calender

Ashley. Today it is your birthday and I hope with all my heart that by your next birthday you will be celebrating it with your full family. I know how much you yearn for the them to be with you and the agony of the past week's delays. You are an amazing woman of incredible depth, compassion and passion. Your future adoptive child/ren are so so fortunate.Hang in there beautiful birthday lady.

What she said. Really.