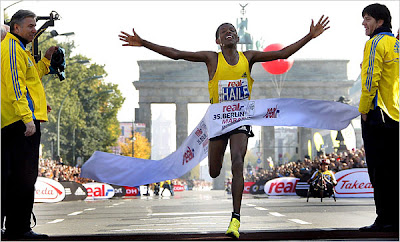 Today Haile Gebreselassie, Ethiopian mega-hero, broke his own marathon world record becoming the first runner to finish a marathon in under 2 hours, 4 minutes. This was his third straight win at the Berlin Marathon. Teammate Askale Magsara came in second at 2:21:31, marking his own personal best.

If you ever turn your eye to long distance running, you will see Ethiopians near the front of the pack. This year at the 2008 Olympics in Beijing, Ethiopians brought home 4 gold, 2 silver, and 1 bronze medals. Ethiopians won gold in both the women's and men's 10000 meter and the women's and men's 5000 meter. East Africans, Kenya and Ethiopia in particular, have dominated long distance running for decades. So I wondered why. Here's what I've learned: 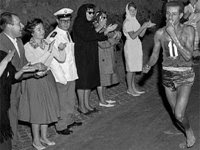 Many believe Ethiopian athletes engage in more disciplined and regimented training, and at the same time are more relaxed at race time. The legendary Haile Gebrselassie, whom many young Ethiopians have grown up trying to emulate, says that running in Africa is not an individual sport and that in Ethiopia in particular, runner support one another. Others state that female athletes in Ethiopia are more respected and supported than in Kenya. Others speculate that because life in Ethiopia is hard, it is for many, a way out of poverty.

What is undeniably true is that generation after generation of young Ethiopian has had a long distance runner to idolize. Haile Gebrselassie, 34, would have grown-up knowing the story of a shoeless Abebe Bikila (pictured above) who won the 1960 marathon gold in Rome. He then went on to win a second one in 1964 after recovering from appendicitis. When asked why he had not worn shoes, Bikila explained, "I wanted the world to know that my country, Ethiopia, has always won with determination and heroism". Gebrselassie has since gone on to inspire countless young Ethiopian athletes himself.